I'm not sure what it is that compels bands to pen bio's which confidently and vaguely affirm that they're "a four piece, indie-rock band from the heart of [you guessed it] Manchester" and then just leave it there as if no further info is needed. While I can appreciate the [heads or tails] naivety/audacity of this no-frills approach to marketing, it would be nice if aspiring bands would throw the potential listener a bone once in a while; you know, take the time to package themselves as the equivalent of "lamp lights in the distance on a moonless night" as opposed to "a tawdry wheaten cardigan in the beige".

I think what i'm trying to say here is that creative musicians don't always make creative salespeople. So it's just as well that there are platforms like Feshonthenet which give these lovable, green and slightly muddled artists a fair hearing; letting their music do the talking and putting them on an even playing field with their better presented [and often represented] competition.

Take 'WILDFIRES' for instance, I stumbled across the groups latest single 'Mr Solo' two weeks ago on FOTN; Wildfires are one such group whose Soundcloud about section contains nothing but the unappealing tagline 'Just another Manchester indie band?'... if this was tinder, i'd be swiping so far to the left that i'd be picking Marx's nose. And yet because I heard the group through the prism of the FOTN inbox (where all I see is a playlist, leaving little room for the artist to self sabotage) I listened and i'm so glad I did. 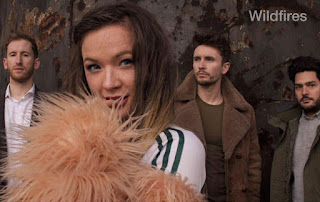 'Mr solo' is a work of melodic slightly angular feeling guitar pop which lends vocal influences from contemporary soul and Rn'B. Lead singer and keys player Poppy-Jo's performance is absolutely stand-out; and the interesting arrangement featuring unassuming synth swells, and lilting drops makes 'Mr Solo' really stand up to repeat listens. Unsurprising then that since I first dipped my toes in the water this single has gone and scooped up radio plays on 6 Music and Amazing Radio. So heads up, Wildfire's are no mere "Indie" group, they're a promising alternative-leaning pop band whose music is rich in bittersweet flavour and subtle notes like a bar of quality dark chocolate. I can't wait to hear more.