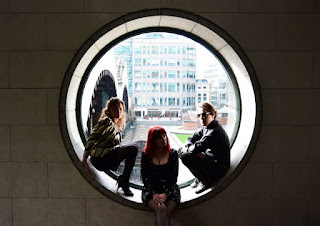 We're seriously digging London based Disco Punk's Bugeye at the moment; DIY to the core, and politically on point, they're the kind of band that you can't help but switch onto. Having impressed us last year with their single 'Wake Up' (which we included in a playlist feature earlier this month) we're pleased to inform you that the feisty three-piece have returned on fine form with their latest offering 'I'm Not The One'.

With a detectable 80's 'New Wave'/Punk influence in its angular guitar lines, 'I'm Not The One' has an attention grabbing, almost jarring quality; It's a track that gets under the skin easily, forcing the listener to snap to attention at the stylistically demanding progression of contrasting elements. The superlative vibrato vocal technique of vocalist Angela Martin is used to the full here, with big wavering notes dominating the chorus, and making those changes all the more dramatic.

In short 'I'm Not The One' is a great listen. It's a track that inhabits that wonderful sweet-spot between the progressive and retro, a trick which Bugeye in general terms do so well. Synthesizing the familiar and the new, to create pop music on their own terms, we love it.