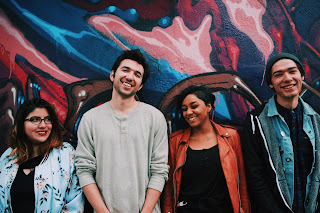 Floral Jacket are a four piece garage rock band from Fairfield, California, whose sound leans towards the more urgent, and fuzzier strands of the indie-pop spectrum.

The band have just revealed their second single 'Deal' which has hit streaming services today; 'Deal' is an ecstasy inducing 3 minutes of heart-warming lo-fi jangle-pop.

Set in a tempo of "FAST", 'Deal' opens with an insanely rapid snare fill from what can only be (we assume) Solano County's most heavily caffeinated drummer. Soon we're whisked away by clanging, lightly overdriven guitars and the soaring voice of vocalist Gabriella Buchanan.

While the production does admittedly leave a little to be desired [i'm near 100% certain this was recorded in a garage or basement] a more discerning palate will find that this is organic, wholemeal, artisanal indie pop of the highest degree; unfiltered, unsweetened, jangle-pop complete with the must have promo shot of a band of normal people awkwardly smiling and looking a little out of their comfort zone.... we love it.