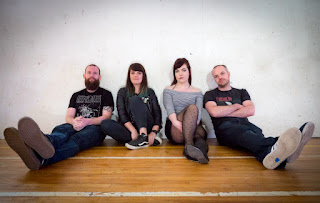 Galway based Garage-popsters Dott have returned with a new politically charged single 'Like a Girl'. Featuring Sadie Dupuis and taken from their forthcoming album Heat Swell (due out on June 8th via Graveface Records), 'Like a Girl' is a bold 3 minute bout of fuzzy guitar pop, that marches on with gritty determination and resonating chanted vocals.

Accompanied by an engaging video (by Black Tongue Visual Media) 'Like a Girl' offers a powerful, modern interpretation of femininity as combative, empowered and "Strong". As we can see in the video which conflates pro-choice 'Repeal the Eighth' campaigners with participants in a roller derby.

It is interesting to note that Dott like fellow Irish band BARQ (who have also featured on EP), have been so vocal in stating the degree of influence that the "Repeal the Eighth" movement has had on their music; while worlds apart in their sonic expressions, both groups share much thematic common ground; the need to be vocal, proud and insistent in one's interactions with the world.