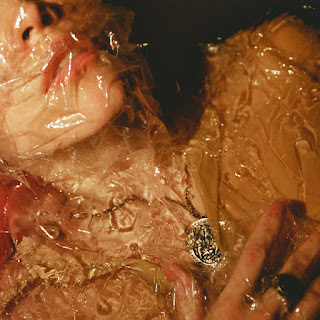 After six years in the wilderness 'Now, Now' have returned with their new album 'Saved' out via LA's Trans-Records. Best remembered for their 2012 Album 'Threads', 'Now, Now' were a group that once comfortably occupied a niche in the Emo-shoegaze end of the Indie Rock spectrum, and on the back of anthems like 'Wolf' (a playlist favorite of ours to this date) toured Europe with Paramore before disappearing into a long hiatus.


That absence could now be regarded as something of a chrysalis, as the re-emergence of 'Now, Now' is paired with a change in sound and focus for the creative partnership [Brad Hale and KC Dalager] which, often flirted with, but never fully committed to electronic elements. 'Saved' is a world apart form the groups previous inception; embracing warm synth pad's which bubble and blink between the the pulsating beat of the drum machine there's an unabashed electro-pop sensibility at play.

There remains something of the old angst to 'Saved'; more Tegan and Sara than it is CHVRCHES, KC Dalager's immediately recognizable whisper, still draws in the listener and conveys a sense of loaded emotion; and her lyricism remains as cutting and direct as ever (perhaps shining more when paired with the chirpy, pop production).

Heartfelt and sincere 'Saved' is a welcome return to form for a group long missed for their inimitable expositional style, succinctly capturing feeling, sensation and laying emotions bare