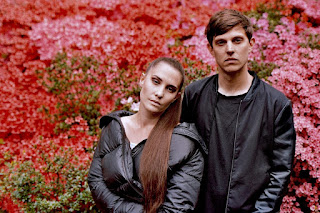 Alternative-Pop duo Alpines are back. The stalwart London duo (who boast a cult following) announced yesterday that they would be making their much anticipated return on a flourishing third album titled 'Full Bloom', which is due out on the 16th of November.

To celebrate the news the group have also unveiled a new single 'Out of view', which is released today via Untrue Records. With shoots emerging from the earthy depths of a buzzing bass synth 'Out of view' is 3 minutes something of exquisite 90's inspired electronic-pop. A delicate track, with a distinctive downtempo drum-loop the single has a pronounced chill out vibe, however there's plenty of colour to be found thanks to the subtle production and stand out vocals of Catherine Pockson.