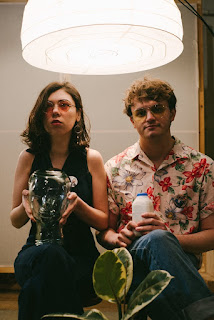 'Oh hello there, Milky Milky' says the promo picture for Megatrain (which I can only assume is some sort of homage to the Punt and Dennis character Mr Strange), the band + their beverage makes a quirky, arresting image, and does what any good press shot should do; spark curiosity, as it did with me when I first stumbled across it*.

The groups debut offering 'Angel (Cindy)' is a chilling Pop-Noir duet, playing one fatalistic vocal off of another as looming sustained keyboard notes provide a menacing sense of atmosphere. As the track grows, dark arpeggiating synthesizers are introduced behind ghostly swells of ebow, allowing this haunting ballad to evolve from the theatrical into the cinematic.

It is in short a dazzling first offering from the creative partnership of Tiger Cohen-Towell and Felix Mackenzie-Barrow; Angel (Cindy) is dramatic, intelligently arranged and ultimately moving. We can't wait to hear more.

(*A personal note here: as a writer I must say it was refreshing to see milk as a choice of produce to pose with; especially following 2015/16 when I saw so many press shots of bands voraciously consuming a blood oranges that I was left in doubt as to whether or not I actually ran a music blog or a greengrocers. - EP)