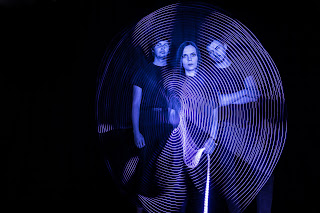 Synth-Pop trio Twist Helix are back, with a new album on the way (via Paul Back Music October 05th) and today they released their latest cataclysmic single 'Graphite'.

Dealing with a theme of artistic frustration, 'Graphite' has an intensely dark atmosphere. Swelling into being from a foreboding bass-synth drone, the single suddenly erupts into a torrent of synth-punk rage, with wildly exclaimed vocals cascading off of a rapid succession of accented snare drum beats. These whitewater chorus' deliver an urgent, visceral side of Twist Helix, that has been hinted at in previous releases but is fully realized here.

At about the 1:30 mark we enter the eye of the storm, as the downpour eases, vocalist Bea Garcia delivers a tender, melodic interlude singing "go to where the water flows" before releasing a synthesized hurricane in the single's final turbulent deluge.

In keeping with previous releases, the new single is accompanied with some gorgeously stylish cover-art depicting a cyberpunk interpretation of the Newcastle cityscape. The iconic Tyne bridge is shown in two, with the band traversing the bed of the drained river basin.

Powerful and Dramatic, 'Graphite' is another awe-inspiring single from one of the UK's most promising emerging acts.