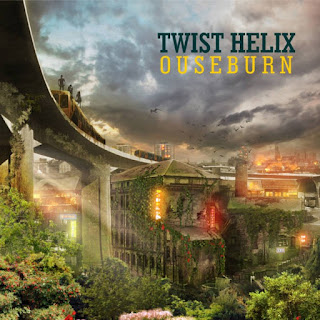 Today is the first ever #NationalAlbumDay (@AlbumDayUK) here in the UK celebrating love of the album format. Here at Earthly Pleasures, we believe long play releases are special. The album allows an artist space to develop their ideas to their full potential, giving space to expand on themes or feelings and in doing so allows the listener to take in the full spectrum of their creative vision.

As Earthly Pleasures is a new music blog, focusing on contemporary and emerging female fronted artists we thought it would be fitting we use our #NationalAlbumDay feature to champion a release by an emerging UK Group.

Released via Paul Back Music on October 05th, Ouseburn is the industry debut by UK based goth-pop group Twist Helix (following on from their 2016 self release Manifesto); A synth-pop Künstlerroman, dwelling on themes of place, modernity and renewal.

Inspired by the northern metropolis of Newcastle Upon Tyne, the album opens with a stirring synth-pop anthem dedicated to it 'Newcastle' which immediately transports the listener to the shores of a post-industrial northern city, in the process of reinventing itself. The chorus hook


'Flock to docks and to its old quarters, artist hearts tided on like the waters'

serves as the perfect preface to the groups post-modern, post-industrial narrative. It's a triumphant and hopeful opening installing the albums central theme, that the fate of a place and its people are interlinked.

Ouseburn is everything a great album should be; dramatic, ambitious, intellectually stimulating and with a message. The narratives conclusion sees the city become a victim of its own success. The Ouseburn is gentrified and the bright lights of its vibrant arts spaces are extinguished through economic pressures. However the group offer a ray of hope; an alternate version of the ending track 'Little Buildings' titled 'Collapse' [Bonus track] allows the music to continue, perhaps suggesting a cyclical nature to the process of creation and that this realization offers redemption.

We love this album.