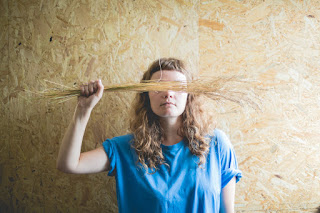 Following on from a successful crowdfunding campaign, 'Arcana' is the debut album from Newcastle based alt-folk songstress Jayne Dent, better known by her stage name Me Lost Me.

We first introduced you to Me Lost Me with the release of her entrancingly atmospheric single 'Eyes and Ohs', and have watched with interest as the innovative, experimental musician has honed her craft touring the UK supporting acts such as Let's Eat Grandma (See EP April 18).

'Arcana' is a strikingly mature debut, with a satisfying immediacy and sense of conviction. Firm in her identity as a progressive Folk artist, the experimental elements to Me Lost Me's compositions are but electronic garnishes; blinking LED strips and neon back-lights which illuminate the details of her composite songwriting.

Choice pick from the album is the hypnotic single 'Chamber Bed' which bewitches the listener with its mysterious allure. We can't recommend this album enough.