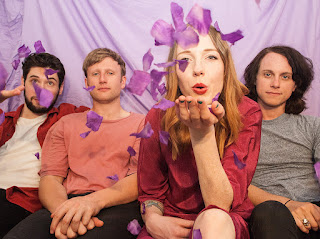 I remember liking Gold Baby almost immediately. Upon hearing the groups previous single 'What Party?' I found something immensely relate-able. The bands gloriously unabashed, lean and direct jangle-pop sound, took me in the same way as the awkward honesty of their somewhat downtrodden lyrics. Misery loves company I suppose, so it's just as well that Gold Baby are back

'Maggots' is the groups latest single and it's "late" release date (December being something of a fallow period for the industry following the autumn rush) actually seems planned to emphasise the songs central theme of missed opportunity.


"Maggots is the sound of missing the boat, of being eaten alive by your own expectations; it’s for anyone who feels eternally late to their own party, regardless of what time they get there"

Opening with a slightly lethargic guitar riff, the number quickly finds it feet and takes off at a dash as Siân Alex's Kim Deal like vocals usher the group on, hurdling over the Dream pop, and cycling past the Slacker Rock sections of this indie-pop triathlon, the home straight of which is undoubtedly the part-singalong, part-instrumental section which has echoes of the Pixies at their raucous best.

And then it's all over, and I find myself straining to see the instant replay. Because Gold Baby deserve so much more than a silver medal.