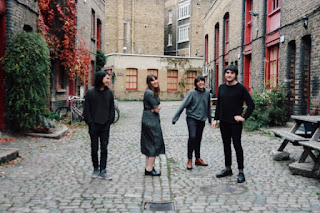 Hailing from England's south coast [Brighton/London] jarring indie-pop quartet Foundlings have ruffled some feathers, with the release of their dazzling new single 'Enemy'; an angular indie-pop gem, bristling with energy and an idiosyncratic off-kilter melodic slant that will perk the most seasoned of listeners ears.

Foundlings new single, 'Enemy' is taken from Foundlings debut EP slated for release on 01.03.2019 via Last Night from Glasgow, the EP will be available on on CD, DL and Limited Laithe Cut Vinyl (40 Numbered Copies Only) snap one up while you still can!