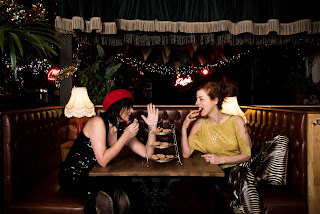 In yet another a sign that the end times really are upon us, it appears that Euro-disco has become the new punk, as evidenced by defiant fist-pumping single 'DISCO-NECT' by Edinburgh/Brooklyn duo DJ Scratch And Sniff.

At a time when all other genres seem incapable of getting to grips with the unprecedented turmoil of British politics, the two-piece have delivered a quirky, Pro-Disco / Anti-Brexit floor filler as a much needed antidote to our current malaise.

'DISCO-NECT' is an engrossing listen, mixing Europhone accented samples with a classic dance hall sound that harks back to the dizzying year of 1973 when the UK joined the European Union (which was coincidentally the year many fans say Disco was born). With an upbeat pace, wiggling bass-lines and chuckling wah-wah guitars it's a protest song that injects some much needed positivity into our national convalescence.

Released on 29th March 2019 on the Colliderscope label, 'DISCO-NECT' is an excellent debut offering by a promising electronic two piece.