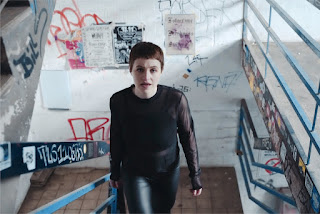 It's been apparent to us for some time now that HAVVK are a band destined for greatness. Since summer 2018 Julie Hawk and her formidable group have shared with us excerpts drawn from a seemingly inexhaustible supply of alt-rock anthems; from the dreamy psychedelic art-rock of 'GLASS', to the harder edged post-punk sounds of 'ALWAYS THE SAME' and 'IF I DON'T TELL YOU', HAVVK have never failed to leave an impression on the listener with their arresting and immediate guitar driven rock leaving no-one in any doubt that HAVVK are one of the brightest lights to emerge from the indie circuit in recent years.

Setting the scene in the lead up to their highly anticipated debut album Cause & Effect is latest single ' The Factory' which brings the trio back to their shoegaze roots after a spate of more urgent offerings. 'The Factory' pulls at the senses instantly with its sparkling guitar lines and flighting percussion, nimbly accenting Julies deeply expressive vocals.

As comfortable as the group are firing from the hip on their fuzzier more frenetic singles, it's on tracks like 'The Factory' that we are reminded of just how rounded HAVVK's sound is as a group. The ease at which HAVVK are able to shift from caterwauling punk singles to bittersweet melodic numbers like this, and to do so without any sense of contradiction/compromise is a rare thing in an indie band, one to be commended.

Cause & Effect is slated for release on 22nd November 2019 via Veta Records.