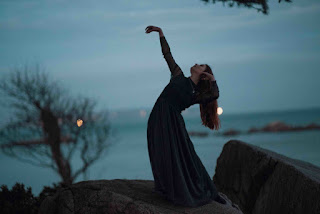 With a sound as dramatic as the elongated swoons of her press-shots, which see the artist portrayed like one of the crestfallen heroines of Pre-Raphaelite portraiture; magical-folk singer RUNAH is a talent with a Romantic grandeur, and has seriously impressed on her latest cinematic effort 'Shame'.

With strong soulful vocals and pulsating percussion 'Shame' is a deeply atmospheric and lyrically intense track, grappling with what RUNAH describes as "the changeable feminine divine being painted as shameful, but also how shame is constantly perpetuated in society."

With strange dreamy scenes featuring angels, fallen women and the threat of judgement, 'Shame' would have done Thomas Hardy proud with it's striking, symbolic imagery that could have been taken straight from the pages of Tess of the D'Urbervilles.

'Shame' is taken from RUNAH's debut album Strange, due for release on 5th May 2019 via Beardfire.