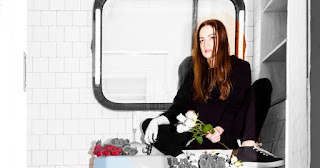 Acerbic and uncompromising, the abrasive guitar driven sound of Brooklyn's Russian Baths deceptively conceals the ruminating anxiety of shoegaze with a perturbing harshness lent from DC hardcore and the hard learned lessons in dissonance and atonality that come care of New York's 1980's avant-garde scene.

It's a cunning maskirovka to say the least, one which expertly camouflages the fleeting tender moments of their music under an explosive canopy above. This turbulent sound is no less threatening on their latest single 'Tracks'; a ferocious Katyusha barrage of Noise-Rock, which only lets up to relieve the fragile vocals of Jess Rees as she explores the complex nuances of self-respect with striking vulnerability.

Tipped by US broadcaster NPR as part of their SXSW coverage, Russian Baths continue to live up to what are understandably high expectations. New single 'Tracks' is taken from Russian Baths' "as-yet-to-be-titled" debut LP which is slated for release later this year via what is quickly becoming Earthly Pleasures's favorite Brooklyn-based indie label Good Eye Records (who readers will remember have recently treated us to a new release from Parrot Dream).