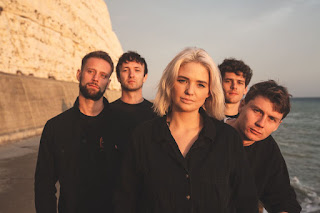 Everyone has a favorite put-down don't they? A precision guided, hollow point silver bullet of a disparaging remark, cocked and locked for those special occasions when you really need to verbally destroy someone [I sure do].

For Reading thrashers Saltwater Sun that word is 'Mouthbreather', literally someone too stupid to learn to breathe through their nose and what a put-down it is; heated, to the point, and as biting as their ferocious new single which shares this title. Speaking of the new single front-woman Jen Stearnes explained: “Mouthbreather is a monumental rant about the myriad people who get on Saltwater Sun’s collective last nerve.

"Loud chewers, bad drivers and mansplainers – the list goes on".

And it is, in a way, there's a real acrimonious quality to the track and Jen's vocal delivery in particular, but the track is more than just some agitated tirade. There's also a calculated quality to 'Mouthbreather' and a real intelligence in it's delivery. Take the caustic sarcasm after the first chorus as Jen utters "perseverance, patience that's how wars are won" cuing the band to rapidly deviate into an hasty volley of jagged accents before returning to the tracks earlier snarling pace. That's no throwaway blast of Indie-Rock riffage, that's a barbed demand that you sit up and take notice of a rock band in the process of delivering the smack-down of lifetime.

Brutally heavy hitting and with a razor sharp wit, 'Mouthbreather' is available now on digital platforms.