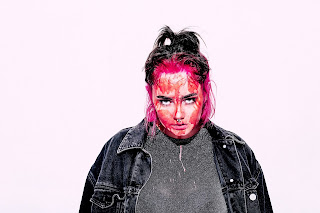 'Straight Girl' is the latest artistic nom de guerre of queer dance-punk producer Holly Readman. Based in Leeds, we first encountered 'Straight Girl' under the short lived moniker 'N/\L/\', and were wowed by their high energy, riotously uninhibited live performance which formed the perfect accompaniment to an electric, live wire set of political electronica.

On their latest release 'Ugly', 'Straight Girl' continues to push at the boundaries of pop, delivering an off kilter floor filler, that lyrically takes ownership of the unattractive and transforms it into a statement of pride. Mixing lo-fi synth drones with a captivating rhythmic immediacy grafted from EDM the listener is constantly challenged to question their notions of the attractive and of the mainstream.

Straight Girl is at the vanguard of a growing number of contemporary British electronic artists who are bringing DIY fringe music culture and an unapologetic queer-feminist discourse into the heart of the modern dance scene. Their music is idiosyncratic, consciously imperfect, and vitally important. In an age where pop culture has been relentlessly moving towards an insipid homogeneity, artists like Straight Girl for all their 'Uglyness' offer an alternative that not just politically liberating, but musically exhilarating. So listen up, this is what the future sounds like.