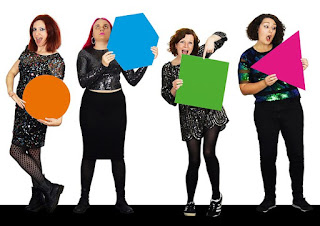 Our favorite Disco-Punks Bugeye are back and better yet they've paired up with DIY heroes indie-label Reckless Yes on the release of their new single 'Electric'; a charged new wave banger that sparks wildly on a surging current of guitars, synthesizers and energizing gang vocals.

Grappling with the fleeting nature of modern love 'Electric' is a Bugeye doing what they do best; an uninhibited fuse-blowing bombardment of  joyful disco-punk, that somehow remains earthed thanks to its relatable lyrical content. It is also however a tantalizing glimpse of things to come

If 2019 was something of a hectic year for the dynamic South Londoners (who haven't let up their momentum, in spite of a prolific spate of releases, a busy touring schedule and lead singer Angela somehow finding the energy to promote a gender balanced music festival in the birthplace of punk). 2020 will see the band go into overdrive as the new single comes with news of an as-yet-untitled album, produced by Paul Tipler (LIINES, Elastica, Sophie and the Giants).

Trust us, like the new single itself the Bugeye album will simply electrifying.