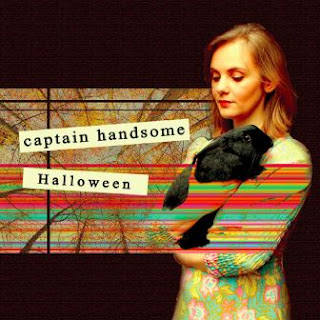 It's nice to start a new decade here at Earthly Pleasures with one our highlights from the previous. Captain Handsome (Solo project of Lily from Fightmilk), got our hind quarters wagging at the tail end of last year with their minimalist jangle pop single 'I Wish I had a Dog', a unexpectedly heart wrenching track which resonated with an understated self deprecating wit, and downtrodden sensibility that we found authentic, unusual and wholly charming.

Captain Handsome's latest effort 'Halloween', is the second to be taken from forthcoming EP I Am Not An Animal, due for CD and digital release on 31 January. Dwelling on feelings of embarrassment, it's an ode to the awkwardness of ones early to mid-twenties, and the nightmare of falling short of the social savoir-vivre when you really should know better. About the track Lily said: “‘Halloween’ is part ode to Goth Christmas (the best day of the year) and part hardcore whinge about parties going wrong. If you've ever ended up as somebody else's funny story, I hope you manage to exorcise it and move on rather than putting horror strings into a three minute lo-fi mope.”

We didn't Lily, so we'll be joining you on that three minute lo-fi mope if that's ok?