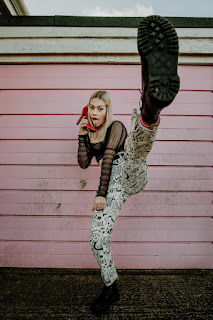 Fans of jangly guitar pop with a fraying slacker edge will continue to find charm in the precocious punky lo-fi of Lauran Hibberd. Ever since falling in love with the infectious immediacy of her spikily delivered, subtly political 2018 single "WHAT DO GIRLS WANT?" we've kept a watchful eye on the blossoming career of one of the UK's most promising Indie-Rock performers.

While there's always been a deceptive juvenility to Hibberd's sound and presentation (it's simplicity belying a knack for expert song craft and a razor sharp wit); one can't help but feel that with each successive release Lauran Hibberd really is coming of age. Although new single 'Bang Bang Bang' is according to Hibberd an "ode to the teenage girl" and made for a movie "prom scene", there's a toughness and maturity detectable in the arrangement and delivery, that speaks to a firmer more assertive version of Hibberd's sound, the verses barbed with deliberate, hard hitting, rhythms punctuating the bittersweet melodies, and choice lyrical phrases in a style not dissimilar to early Honeyblood.

There's still some saccharine elements to be found of course; the driving guitars and vivid pop intonations that give Hibberd's music its momentum show no signs of wearing with age. And while it may be said that Hibberd is growing up as a performer she's certainly not slowing down, and I feel she does well not to do away with any of that outpouring of energy that is so much of her music's charm. The chirpy two note klaxon of synths on the chorus for instance, gives the track a much needed lift, invoking some of the uninhibited joy of noise-pop that suits the cartoony onomatopoeia of the singles central lyrical refrain.

'BANG BANG BANG' is another excellent offering from a rising star of the UK's alternative scene. Having long ago conquered the Solent straits to become one of the Isle Of Wight's proudest exports, wowing fans across the UK and Europe, Hibberd now has her eyes set on making inroads into the US market, with an upcoming showcase at this years SXSW. We wish her all the best in the year ahead.