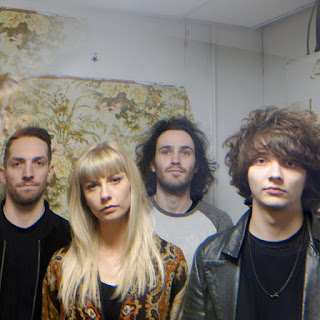 Flavoured with elements of noise-rock, made palatable by the more immediate and arresting traits of grunge; 'Jelly' is the appetising debut offering from Tyneside alt-rockers Pave the Jungle. A single with a sharp but sweet mix of punchily angular guitar riffs and brooding vocals, coming together in a thick gelatinous form, a tremulous anthemic din that leaves the listener weak-kneed and shaking like... 'Jelly'.

Pave the Jungle is the brainchild of songwriter Rachael Whittle, whose grave alto vocals, and formidable guitar-work we last brought you in a playlist feature from 2017 - where Whittle's work with her previous project 'Ilser' could be tentatively located on the the sludgier end of the grunge spectrum, Pave the Jungle is a bit of a creative departure in part spurred on by Whittles participation in an artist mentorship program coordinated by Generator North East which saw her collaborating with Nadine Shah and James Brown (of Pulled Apart by Horses). Speaking of the difference between the two projects Whittle remarked...

“For too long, I was rooted entirely in live performance[...] Whatever the songs were at the time I scraped them off stage and into the studio, that’s how they remained – forever. Now, the intention is to deliberate more. Not just to view the studio as a place for exploring more daring ideas, but to make sure there’s real meaning and value attached to the end-result.”

Whittle, and Pave the Jungle are now reaping the rewards of that insight, after serving up a five minute rock epic like 'Jelly' it's all but certain listeners will be back for seconds.