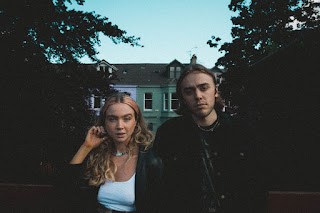 As acerbic and cutting in its assertive attitude as it is in its equally pointed, (dare we say piercing?) guitar tone, 'Sharp Tongues' the latest single from no-nonsense Scottish rockers Dead Pony, is a a two and bit minute outburst of spiked post-punk ferocity.

With jagged edged, angular riffs slicing away between the pneumatically hammering pistons of a motorik beat, and the pointed lyrical incisions of front-woman Anne Shields, this single is raw, angry and at first a bitingly abrasive listen. But as confrontational, as it is there's also a compelling almost mesmeric quality to the confidence and unequivocal fierceness of the single.

Speaking about the track Anne revealed: “‘Sharp Tongues’ is written about those people who absolutely grind your ears. Those people who are hellbent on spreading gossip and starting rumours. They are so unfulfilled with their boring lives, that to add a bit of spice they rely on stirring the pot and starting shit with people. I bet everyone had at least one-person spring to mind after reading that – and that is who this song is about”.

Wow. Not pulling any punches then huh?

Headstrong, with boundless energy and attitude to spare. Dead Pony are definite ones to watch this year. Having already caught the attention of BBC Radio 1 (Huw Stephens, Jack Saunders) as well as that grandest of brit-rock institutions NME, the future looks bright for Dead Pony; the latest trailblazers to emerge from that ever dependable reservoir of great guitar bands Glasgow.