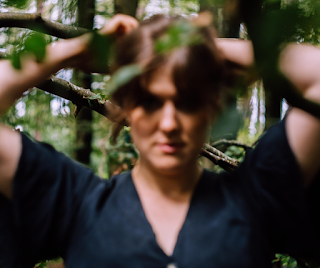 Glasgow based alternative folk singer songwriter Mima Merrow has impressed us with her breathtaking debut single 'Freckles', "a touching lament for what is lost in the act of survival".

Lyrically confessional, intimate in both it's semantic content and the gentle intonation of its performance (which unabashedly draws upon the ebbing musicality of Mima's Belfast accent), 'Freckles' is a curious crossover between wistful piano ballad and delicately poetic spoken-word.

“This track is a search for strength in the midst of grief” explains Mima. “It’s that moment when we realise we are made of ancient stardust and all we need can be found in our bodies.  Growing up in a place where your whole self could be, at once, reduced down to the minutiae of happenstance and conflated into rituals so generic they feel meaningless, space to figure yourself out can be hard to come by. This track looks at that emptiness and how to find connection.”

Unadorned, understated yet undeniably authentic on 'Freckles' the listener is immediately drawn to Mima's riverrun stream of poetic consciousness which overflows with candid and striking imagery. It is a performance so arresting, that it wants for no accompaniment other than the organic warmness of the piano, and the sparing hair raising  flourishes of pitched percussion that interject their chimes at unexpected intervals.

Compelling and moving, ‘Freckles’ is all about honing the listeners emotional intelligence, focussing on what is left, inviting us to notice the small, yet unmistakable traces of our ancestors in tree roots, in the eyes of another even in the freckles of our skin.

Recorded and mixed by Frightened Rabbit’s Andy Monaghan 'Freckles' is released today and is taken from Mima Merrow debut EP, Good Grief due for release in December 2020.