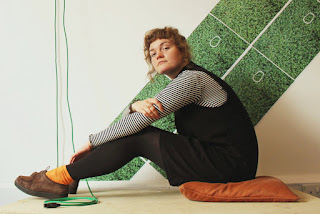 When It comes to genre's we're of the opinion that the more hyphens that can be involved the better. North-East based 'Me Lost Me' aka artist musician Jayne Dent particularly excels in this field with her Experimental-electro-ambient-looping-voice-drone-folk taking the crown for the best sequence of words we've ever joined together on Earthly Pleasures.

Left-field, as is most ambient or noise based composition, the folk vocal root of Dent's compositions furnishes her work with a surprising immediacy and relatability. There is a familiar aspect to these sounds, which allows 'Me Lost Me' to crossover from abstraction into something if not tangible then at least fully formed.

Take Me Lost Me's track 'Eyes and Ohs'; a sparse opening of bare vocal loop and swelling reverse reverb ("ghost vocal") effect immediately sets a mood and builds tension. The rasping, dread inducing air noise sound which follows is pure Kubrick (see the deactivation of Hal 9000 in Space Odyssey if you don't get the reference). Yet these Alien and unnerving elements are made almost homely by the simple electronic percussion and (crucially) Dent's captivating vocal riffs. Vocals which incidentally bare resemblance to the (pardon the pun) long dead folk tradition of 'Keening', a type of funerary wailing, which again while subconsciously familiar has an equally unsettling quality.

Me Lost Me is currently crowd funding her debut album, for more details: https://www.indiegogo.com/projects/me-lost-me-debut-album#/