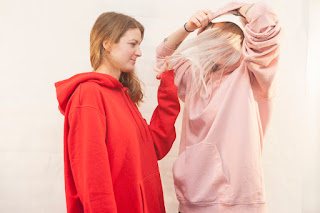 Dark pop duo 'Syrra' (sister in Swedish, thanks Duolingo!), are a compact two-piece worthy of attention. Based in London and comprised of members Aneta (Swedish lead singer) and Sinah (Berlin-born producer) the group have only been active since late 2017 when they attracted attention of the back of their glacial pop number 'I Can be Mean'.

The group have just released their third single 'Wasp' today an arty leaning, and at times geometrically abstract feeling pop track. It's a song which rewards in both its arrangement and uncompromising aesthetic; with Aneta's sparse vocals surfacing as an interlocutor to the progressive sequenced percussion.

Signing off the about section of track's streaming link the band quip 'Love & weird vibes' - we couldn't have put it better ourselves.