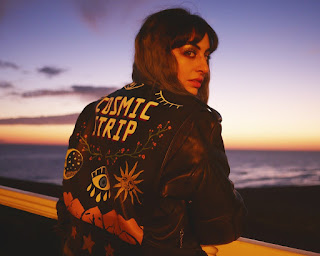 Dreamy-rockers Cosmic Strip have just released their new single 'Heavenly' the first track taken from their debut EP due out this summer.

'Heavenly' is a work of stratospheric shoegaze; hurtling upwards from a grounded opening, spurred on by the combustible click-clack of knocked drum sticks and the whirling propellers of atmospheric guitars. Having built its momentum, 'Heavenly' really takes flight a little after the one minute mark as rising dynamics meet the soaring vocals of frontwoman Camella Agabalyan.

It's powerful, textured and sure to make a brilliant addition to the groups live set. Cosmic Strip embark on a full UK tour later this month