Captain Handsome - 'I Wish I Had a Dog' 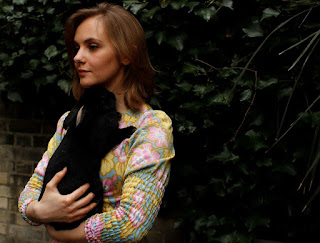 "I Wish I Had A Dog is sort of about wishing you had a dog" says lo-fi pop artist Captain Handsome [Lily from Fightmilk] of her debut solo single. Earthly Pleasure's would like to add it is also sort of about quotidian disappointment, an ode to the struggle with mundane existence, a ruminating soundtrack to what might have been, and above all a tragic anthem with a mysterious uplifting quality that is drawn from an idiosyncratic combination of devastatingly frank lyrical wit and an intelligent melodic ear.

'I Wish I Had a Dog' is an excellent debut, succeeding in re-telling the minutiae of life in a minimalist yet gigantic pop song; with raw vocals pushed to the fore of the mix, leaving Lily's striking lyrical sentiments exposed above the deliberating chug of palm muted guitar. There is a punky lo-fi quality to the track; though listeners familiar with Lily's previous work may be curious to note that Captain Handsome is more bedroom pop than it is garage band, with sparing use of drum machine and arpeggiated synths adding lift to a lean purposeful sound. In a way, Captain Handsome on 'I Wish I Had a Dog' compares favorably to some of the more tender and pop orientated Fightmilk tracks like the lo-fi indie sad dance anthem 'Dream phone'.

Quirky, and striking, we are totally enamored with this lo-fi indie banger. 'I Wish I Had a Dog' is out digitally on Reckless Yes on 8 November 2019.